The Crossroads Bank for Social Security (CBSS) elaborates the E-government strategy within the Belgian social sector and co-ordinates the implementation of the E-government projects in that sector.
Thanks to a huge business process re-engineering between 3.000 actors in the social sector, under coordination of the CBSS, a maximum number of social benefits and subsidiary rights are automatically granted without citizens or their employers having to make declarations anymore and the administrative burden for citizens and companies has been drastically reduced.

The Belgian social security consists on the one hand of 3 insurance systems (workers, self-employed workers and civil servants), that cover maximum 7 social risks (incapacity for work, industrial accident, occupational disease, unemployment, old age, child care and holiday pay - the so-called branches of social security), and on the other hand of 4 assistance systems (subsidies for the handicapped, guaranteed family allowance, minimum income and income guarantee for the elderly), that grant people specific minimum services after checking their subsistence resources. In total about 3.000 institutions are responsible for the execution of the Belgian social security. More than 10.000.000 socially insured persons and 220.000 employers have very regular contacts with those institutions to assert their rights, to furnish information therefore or to pay contributions.

28 years ago, a deep analysis about the working of social security proved that

The creation of the Crossroads Bank and its mission

To improve the service delivery to the socially insured people and the companies and to solve the above mentioned disfunctionalities, the CBSS was created 28 years ago.

The mission of the CBSS is to be the motor of e-government in the social sector, i.e.

A global review of the processes throughout the social security has been realized. The actual situation can be summarized as follows

o    at the latest at the beginning of a work relation, an employer has to declare at which time (date and hour) the concerned worker enters into office

o    at the latest at the end of a work relation, an employer has to declare at which time (date and hour) the concerned worker leaves office 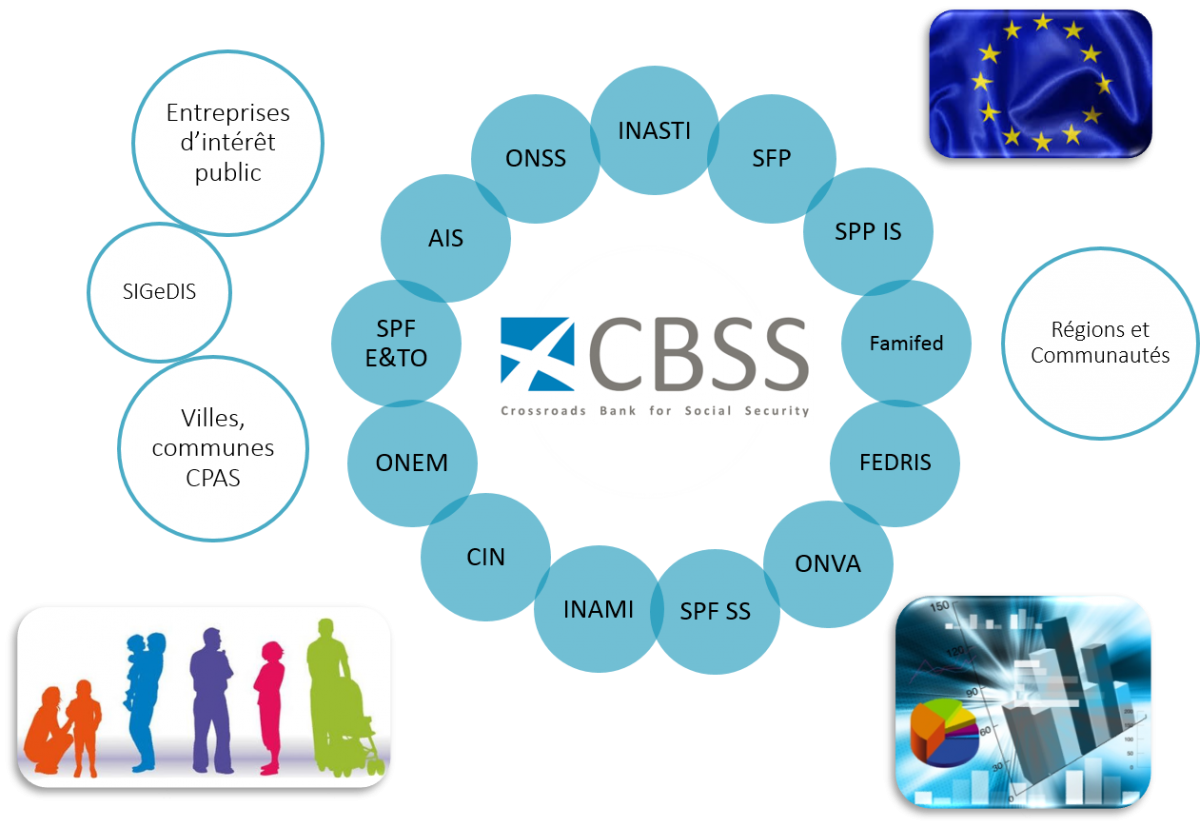 The network between the social security institutions has a star-like configuration. The Crossroads Bank for Social Security, which is situated in the middle of the star, regulates the data exchanges.

o   for each citizen, in which social security institutions he is known, in which quality and for which period

The introduction of this system resulted in what follows

The described E-government approach of the Belgian social security sector was mentioned as best practice in a benchmarking study ordered by the European Commission.

On its own initiative or on demand, the CBSS will continue

More concretely, the following projects will be executed

Delivered by the International Social Security Association (ISSA) for the integrated business process optimization and the digital cooperation platform of the Belgian social security institutions, coordinated by the CBSS - mei 2019

Presentation of our project